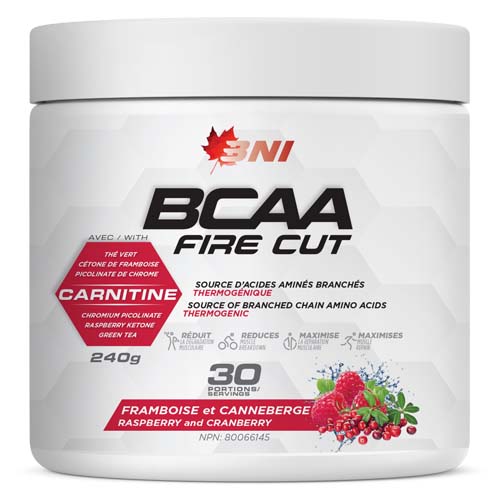 The most innovative weight loss formula, formulated to combine maximum efficiency and an addictive taste.

Why are BCAAs useful in weight loss?

For those who are seriously trying to lose weight and maintain muscle mass, a good supplement of BCAAs will be very beneficial. Indeed, if we reduce our caloric intake but do not significantly increase our protein ratio, there will be an inevitable loss of muscle. In addition, BCAAs reduce the level of cortisol (a hormone produced by fatigue, stress) that causes muscle catabolism and a decrease in testosterone. BCAAs thus protect your muscle mass by limiting muscle catabolism during exercise and stimulating muscle anabolism (muscle gain) after exercise.

This is why we added BCAAs to our fat burner to create the BCAA Fire Cut.

If you are looking for a product that will help you preserve muscle mass and help you use fat for energy, try the BCAA FIRE CUT!

In addition to BCAAs, here is what BCAA FIRE CUT contains per serving:

L-carnitine plays an essential role in the transport of long-chain fatty acids within the mitochondria (parts of the body’s cells). This process in the mitochondria enables the production of energy in the form of adenosine triphosphate (ATP). Carnitine is therefore essential for the proper functioning of muscles, including the heart, a muscle that is constantly in demand and therefore always needs “fuel”.

In 2015, Korean researchers, who had previously worked on mice, treated human adipocytes (fat cells) in the laboratory with RK at different doses. They again observed that raspberry ketone prevents fat from accumulating in adipocytes and promotes lipolysis (destruction of fat) by modulating the expression of certain genes.

L-tyrosine is an important amino acid for brain function and essential for the production of certain neurotransmitters (including serotonin). Our bodies are unable to produce L-tyrosine and we cannot get enough through food alone, so taking a supplement is a good option to help maintain focus in stressful situations, both physical and emotional.

There are no reviews yet.