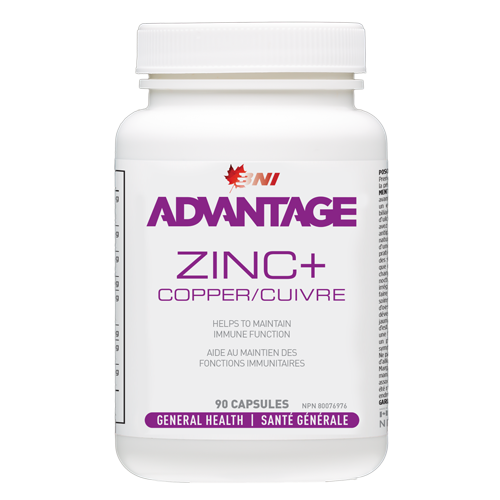 Zinc+Copper is a formula that provides a balanced ratio of zinc to copper to ensure optimal absorption. This balance is crucial because excess zinc can lead to a copper deficiency and lead to consequences on health. Hence the importance of choosing a well-dosed formula based on research.

Zinc is an essential micronutrient necessary for many enzymatic reactions and bodily functions. It is essential for growth and physical development, as well as for the metabolism of proteins, fats and carbohydrates. Unfortunately, zinc deficiency is common, especially in the elderly. Zinc deficiency can play a role in many chronic diseases, but it is best known for its essential role in the immune system. The function of white blood cells is essential to protect the body against the invasion of bacteria and viruses and to regulate inflammation and wound healing. Zinc is also a key factor in the healing of the digestive lining, which in many people is damaged and “leaky”. Clinically, zinc supplementation has been shown to be vital for prostate health.

Common disfunctions: could they be related?

In the long-term, it appears that other long-term, subclinical, “simple” copper deficiency problems – such as impaired bone metabolism, poor glucose metabolism, painful and inflamed joints, neurological dysfunction and increased levels of advanced products for advanced glycation (AGE) – would also manifest themselves in a functional copper deficiency created by excessive zinc intake, leading Dr. Leslie M. Klevay, leading researcher in the field of copper, to warn of the “dangers of zinc supplements”. The problem, of course, is not the zinc supplements, but the excessive or unbalanced zinc supplementation.

Many men take zinc supplements to improve the health of their prostate because it contains the highest level of this mineral of any organ in the body. Most studies have shown that benign prostatic hyperplasia (BPH) is associated with low levels of zinc in the prostate.

Copper: the myth of the free radical

Aside from an over-emphasis on the benefits of zinc and a mysterious tendency to ignore the benefits of copper, a major reason for unbalanced zinc supplementation has come from the myth that copper is a “pro-oxidant” mineral, which could accelerate the damage of free radicals in the body. This reaction is due to the so-called Fenton reaction, according to which “transition metals” (such as iron and copper), when present in their free ionic form, can catalytically convert hydrogen peroxide, which is slightly dangerous, in the vicious hydroxyl radical.

But if the copper ions can trigger the Fenton reaction under the artificial conditions of the test tube, this is not a problem from a health point of view, because the body simply does not have enough free ionic copper to cause worry. Test-tube studies showing that ionic copper can accelerate the oxidation of LDL (“bad “) cholesterol, for example, have used copper ion concentrations literally millions of times higher than those found in our bodies. In fact, controlled studies in humans have shown that even at high intakes (up to 7 mg per day), copper supplements do not increase free radical damage in the body, but even tend to decrease it, probably because of the essential role of the nutrient in the diet, helping the body’s antioxidant defenses.

There are no reviews yet.